International5 hours quarantining herself in toilet after woman tests positive in the... 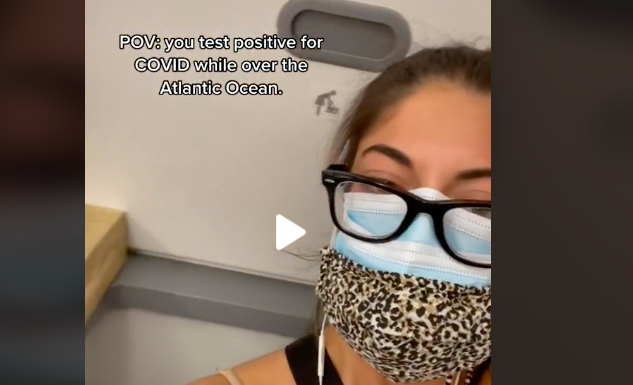 A woman spent five hours isolated in the bathroom of an airplane after she tested positive for Covid-19.

She captured her ordeal on a TikTok video that has been viewed more than three million times.

“I received two negative PCR’s. Got on the flight. Traveled for Christmas. Decided to bring at home tests for my travels. Felt sore throat and tested+,” American teacher Marisa Fotieo commented in her video.

She showed off just how cramped her airborne isolation quarters were, and captioned the TikTok “Shout out to @Icelandair for my VIP quarantine quarters..”

Ms Fotieo called what she went through “a crazy experience.”

She was on her way from Chicago to Switzerland on Dec 20 for the holidays with her father and brother when the test turned positive about one hour after take-off.

The Icelandair flight was on its way to Reykjavik, where the family was to catch a connecting flight to Switzerland.

While there is no way her experience could be remotely described as enjoyable, the flight attendant’s care and support provided to Ms Fotieo by Ragnhildur “Rocky” Eiríksdóttir helped to make it bearable.

After testing positive and knowing the plane was full, she volunteered to spend the rest of the flight in the bathroom.

“There were like 150 people on board, so I said I would just stay in the bathroom for the rest of the flight,” she said in one interview.

The flight attendant took very good care of her.

“Rocky was so sweet and brought me water and snacks, and told me that would be my own little space,” the teacher added.

“She made sure I had everything I needed for the next five hours from food to drinks and constantly checked on me assuring me I would be all right,” she added in an email to NBC News.

Ms Fotieo was quarantined in a Red Cross hotel after the plane landed in Reykjavik, and was required to stay there for 10 days, while her father and brother went on to Switzerland.

Ms Eiríksdóttir’s care extended way beyond the flight. The flight attendant told Ms Fotieo to reach out if she needed anything. And you can tell that she meant it.

“She bought me flowers and a little Christmas tree with lights so I could hang it. It was so heartfelt, and she’s just an angel,” Ms Fotieo said.

“I can confidently say that I would have probably cried for 10 days straight had it not been for Rocky. And Icelandair as a whole really made this experience joyful and memorable, and it was really so heartwarming,” she added in a separate interview.

After she was released from quarantine, Ms Fotieo was due to be joined by her father and brother in Iceland, where they will continue their vacation together. /TISG