The child wanted to imitate what he/she saw in the video clip located on his mother’s phone. The story was apparently revealed on Facebook in a post by one of the parents to a Facebook user who exposed the mishap.

The post by one of the parents says the son of 5 was invited by a 4-year old friend to play ‘licking of his genitals’.

After investigation, the parent say the boy did not carry on with the invitation but the mother says she was traumatised to hear the story.

“I was traumatised to hear children’s stories. Things have happened and I want to check my son’s psychology without him feeling being probed.”

The mother wrote that when she told the boy what the ‘lick’ was meant to be and that it was a sinful act, her son and herself cried.

The boy apparently told the mom he will not do such a thing, urging God to take him to heaven instead.

“I hate the boy’s family and my son’s kindergarten which I think neglected the children and was careless,” she wrote. 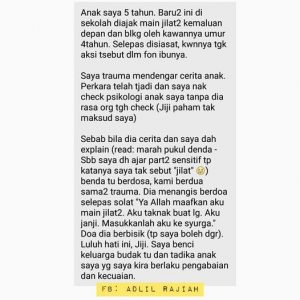 The devastated parents stated that their children had no idea what they were doing.

Looking at the comments section of the post, ordinary netizens who are also parents expressed worry and how much they are scared with such trends.

These have negative effects on the children, some parents shared. Parents should probably lock their mobile phones, not allowing underaged children to have access to them.