Business & EconomyHow an abandoned Boeing 737 is being converted into a luxury villa... 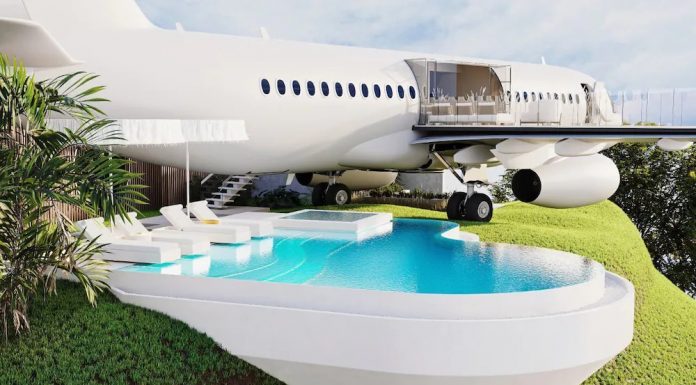 A disused plane is now a luxury villa? Big stretch but true enough thanks to the efforts of Russian entrepreneur Felix Demin who bought the plane in 2021 and placed it at the top of a cliff.

The Boeing 737 has now been converted into a two-bedroom villa with a pool and wing-top terrace.

The plane was previously in the fleet of Indonesian airline Mandala Air which stopped flying in 2014.

In order to make room for the interior, the airline had to be stripped of all its seats and flying equipment. The way it has been done will make you not feel like you’re in a plane at all except for the shell (and the portholes).

The fact that the design is minimalist also gets rid of the claustrophobic feel you would otherwise have on a plane. The home also features a neat little kitchen, a dining nook, another bedroom and two bathrooms.

Other things that are still under construction include a terrace on the aircraft’s wing. There’s also an outdoor infinity pool with views over the Indian Ocean. There is a glass edged walkway on the wing of the plane, which is partially cantilevered over the cliff edge.

The property is known as the Private Jet Villa by Hanging Gardens and is at the cliff top of Nyang Nyang beach in Bali, Indonesia. It has already been listed on the travel website Expedia for 114 million Indonesian rupiah or $7,320 a night.

What used to be the Boeing 737 cockpit is now a luxurious bathroom with a circular stone bathtub. Demin says it took a week to move the plane to the location he had in mind once he got the permits and it was transported section by section.

“Externally and structurally, this is a jet aircraft that we have turned into a luxury hotel,” said Demin. Investors in the property include UK based Russian businessman Alexander Lebedev