B.I, formerly from the K-Pop band iKON is first and second on Twitter’s trending list with the hashtags #BelovedHanbinDay and #HappyBirthdayHanbin as fans celebrate his birthday.

His fans are using Twitter to show their love and appreciation for B.I despite the controversy he is in. 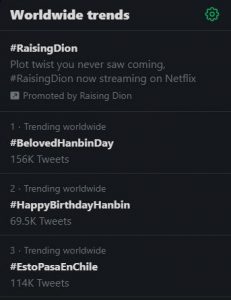 In 2016, after the news broke that B.I alleged attempted to purchase marijuana and LSD, he announced that he was exiting the K-pop group on Instagram.

YG Entertainment, his company, also confirmed the termination of his contract.

On 12 June, the company’s market capitalisation fell to 581.4 billion KRW from 834.7 billion KRW in January.

iKON finally achieved a breakthrough with their megahit ‘Love Scenario’ after debuting in 2015, earning B.I the songwriter of the year award at the 2018 Melon Music Awards.

B.I (whose real name is Kim Han Bin) has over 50 copyrighted songwriting credits through the Korea Music Copyright Association.

He became a full member earlier in the year. B.I was also recently featured in labelmate Lee Hi’s long-awaited comeback single, ‘No One’.

B.I confessed that he considered purchasing the drugs but denied taking them, according to his statement on Instagram.

“I’m deeply sorry for causing a controversy over my inappropriate behavior,” he wrote, according to The Korea Herald . “It’s true that I had interest in something to rely on which I shouldn’t have at one point when I was having a hard time. But I was too scared and worried to follow through.” /TISG