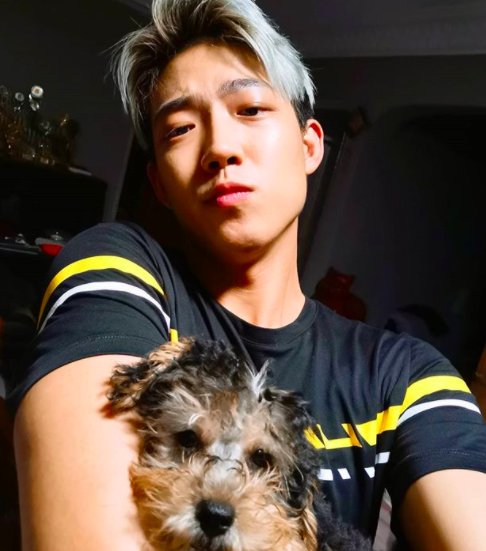 Mediacorp actor Benjamin Tan welcomed his four-month-old male Silkypoo, Toki in his life a few months ago but he already faced an unexpected challenge. Toki became injured at the vet while waiting for their turn last month. The 27-year-old actor told 8days.sg that they took the dog for his final vaccination jab when Toki became too excited, jumping off the chair. The dog landed the wrong way and broke his leg.

According to Ben, “He was whining non-stop, so I knew something was wrong. I tried positioning him upright to see if he could walk but he couldn’t. When I touched a particular spot on his right limb, he started to whine even louder.”  Luckily, it was his turn at the vet and they quickly rushed Toki in. Toki had a ‘minor crack in the bone’ and was sent home in a cast which has to be worn for six weeks.

Thankfully, the entire visit cost about SGD250 which Ben felt was way more affordable than he thought. “I thought it was gonna be in the thousands!” he said. Ben’s furkid remained playful and curious despite having a cast on. Ben shared an incident where Toki was healing well and somehow Toki started humping his bed!

“I was quite shocked ‘cos honestly I was just chilling at my study room and reading my scripts when he suddenly did it!” Ben laughed. “I did not try to stop him ‘cos its a natural instinct for dogs. And he’s still young so guess it’s fine. Don’t think it’s anything major.”

During the interview with 8days.sg, Ben was asked what his family thinks of having a dog int the house.

“My father has always been very supportive of me getting a puppy,” said Ben. “So, it was more of a situation where I was waiting for my mum to give the green light. During the Circuit Breaker, I managed to convince her to allow me to get a puppy by showing her tons of cute puppy videos. In the end, she was the one who went to search for more cute puppy videos. She even suggested a few names,” Ben said. “That’s why I named it Toki, which means Time of Opportunities in Japanese because everything just seemed to align when she agreed to me having a dog.”

Sadly, Ben’s mum fell into a coma on July 4, the day his family was supposed to visit Toki at the pet store.

“I was planning to bring my mum and dad to see the dog for the first time, but my mum got admitted to the hospital that very morning,” he continued. “She hasn’t seen the dog until this day. She’s still the same, still in a coma. But there have been lots of ups and downs, with infections and things like that. We’re just trying to hold on for as long as we can,” sighed Ben. /TISG

India, Oct. 18 -- Republican Senator David Perdue, who is seeking re-election from Georgia, has sparked a storm after...
Read more