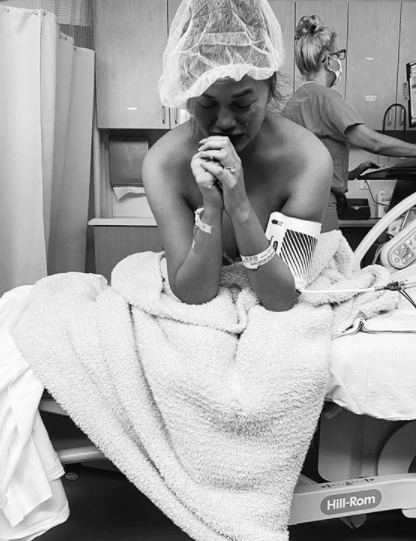 Los Angeles — Chrissy Teigen, an American model and cookbook author, and her singer husband John Legend have lost their third child due to pregnancy complications.

The 34-year-old wrote about the devastating news on her Twitter and Instagram late on Wednesday (Sept 30), a few days after she tweeted about experiencing abnormal bleeding.

“Driving home from the hospital with no baby. How can this be real?” she wrote.

In another post, Teigen said the family was in a “deep pain that you only hear about” and that they were going through “the darkest of days”.

The model also said that she and Legend, 41, had refrained from naming their two previous children until they were born but that they had started to call their unborn baby, a boy, by the name of Jack.

“We were never able to stop the bleeding and give our baby the fluids he needed, despite bags and bags of blood transfusions. It just wasn’t enough.

“We never decide on our babies’ names until the last possible moment after they’re born. But we, for some reason, had started to call this little guy in my belly Jack.

“So he will always be Jack to us. Jack worked so hard to be part of our little family, and he will be, forever.”

In her post, Teigen added a photo of herself looking distraught while clasping her hands in a hospital bed. The model concluded her statement with a message of hope, admitting that “everyday can’t be full of sunshine” and that she and Legend have promised to “love each other harder” as they get through this trying period.

Many also commended Teigen for bravely sharing her story and breaking taboos surrounding conversations about miscarriages.

Teigen had announced only two months ago that she was pregnant with her third child.

Her first two children with Legend — Luna and Miles — were conceived via IVF but this baby was a complete surprise. The supermodel found out about the pregnancy when she was having her breast implants removed. It was because she was so early on in the pregnancy that it was not detected before the surgery.

Recently, Teigen uploaded an update on Instagram Story: “I wanted to update you. My placenta sucks. It’s always been kind of, um, the bad part of my pregnancies. With Luna, with Miles — it just stopped feeding him, taking care of him, I was like stealing all of his food because I was getting huge, but he wasn’t getting big at all. So, he had to come out early and Luna had to come out early. I was induced both times …” /TISG

KUALA LUMPUR, Oct. 18 -- The Perikatan Nasional (PN) administration is thought to be mulling a Cabinet reshuffle that...
Read more