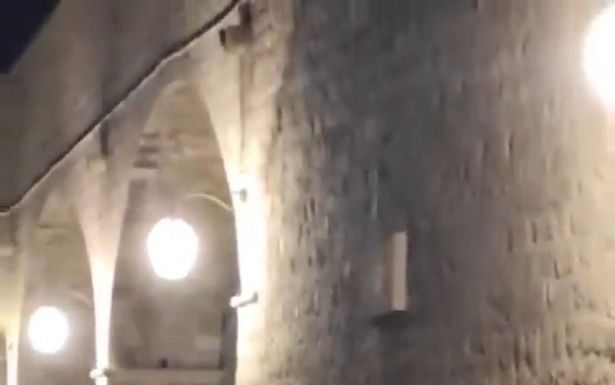 The action, however, came to an abrupt end when the two pulled apart, the girl flipped her dress down and grabbed her handbag

It’s out of control now. People can be seen having sex in public without fear of anyone.

And a man and a lady did just that. And in doing so, they desecrated the GOT, did they not?

In the midst of their passionate embrace, they were captured on camera in Dubrovnik, Croatia, which served as one of the filming locations for Game of Thrones.

A passerby, it seems, was in the area and while the couple were going at it, the person filmed the act.

The video gained popularity, needless to say. After their tryst, the couple can be seen walking away from the location.

The hot X-rated action was captured last week in Dubrovnik, Croatia’s Dalmatia area. The video shows a woman hunched over near the harbour wall with her dress pulled over her back while her boyfriend appears to push quickly from behind.

The action, however, came to an abrupt end when the two pulled apart, the girl flipped her dress down and grabbed her handbag, and the male left while still putting his flies up.

Millions of people visit the spot each year, and residents are allegedly becoming angered by the rise in public urination and sexual misbehaviour.

Numerous audacious couples have reportedly been seen engaging in public sex acts in open areas without even looking for the seclusion of a quiet place, according to local news.

The pair was caught playing together on top of a multi-story parking garage in Birmingham, West Midlands, which prompted the news.

While having sex in public is still illegal in Croatia, the balcony at people’s houses is now also regarded as a public area.

If your neighbours complain that they saw you having sex on the balcony and they saw your privates parts, you might be fined between 3,000 and 7,300 kuna or put in jail for 30 days.

Now, there are reports whether couples who are having sex in public areas are fined or jailed.