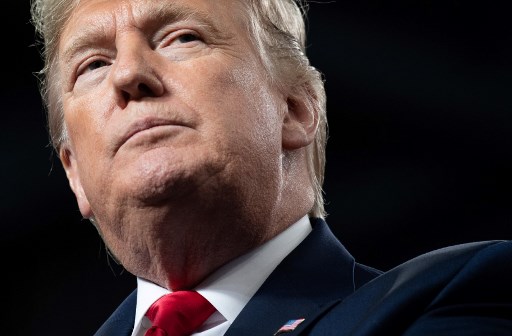 After four years in office, Donald Trump has failed to achieve his promise to eliminate the US trade deficit, and dealt a lasting blow to the multilateral economic system that global trade is based upon, analysts say.

But even if Democrat Joe Biden wins the presidential election as most opinion polls currently show, US trade policy is likely to maintain a protectionist streak and the confrontation with China to persist.

One of Trumpâ€™s main 2016 campaign themes was that the United States â€” the worldâ€™s biggest economy â€” had been taken advantage of by its trade partners and he pledged to shake up global trade arrangements and eliminate the nationâ€™s trade deficit.

Trump has indeed shaken up the global trading system but the US trade deficit has grown under his presidency, and analysts say he has little to show for his efforts.

While the US trade deficit with China â€” which was Trumpâ€™s main target â€” has indeed shrunk, imports from Canada and Mexico have jumped, deepening the overall deficit.

The import tariff increases that Washington has imposed on many products have â€œprotected American manufacturersâ€�, according to Gianluca Orefice, an economics professor at the University of Paris-Dauphine.

But those tariffs also â€œraised production costsâ€� for US industry and demonstrated the extent of the reliance on Chinese suppliers.

â€“ â€˜Breaking not buildingâ€™ Â â€“
The global economic infrastructure is now in a deep state of flux.

â€œObviouslyÂ hisÂ policyÂ has beenÂ deeplyÂ damagingÂ withÂ respect to Europe, to the WTO,Â whichÂ willÂ beÂ hard toÂ repair,â€� said Edward Alden, a journalist and author who specialises on US trade policy and who is currently a fellow at the Council on Foreign Relations think tank.

â€œDonald Trump has shown he is capable of breaking, but incapable of building,â€� said Sebastien Jean, director of CEPII, the main French institute for research into international economics.

â€œWhen one looks at what he got from China one is tempted to say: All thatÂ for that?â€� he added.

The truce in the US-China trade war reached in January left unsolved major points of contention such as intellectual property theft and forced technology transfers.

Meanwhile, â€œthe Trump administrationâ€™s erratic statements and policy decisions have resulted in the US being perceived as an unreliable and untrustworthy trading partner,â€� said Cornellâ€™s Prasad.

This has led certain countries toÂ go around the US and conclude bilateral or multilateral trade pacts, such as when Pacific nations went ahead with a deal after Trump pulled his country out of the Trans-Pacific Partnership.

Trump had vaunted his deal-making prowess as a businessman before his election, but he has shown little taste for intricate and intense multilateral trade negotiations.

Instead he prefers to air grievances against German cars and a French tax on the big tech giants.

â€“ Changing the dynamic â€“
Trumpâ€™s four years in office have resulted in â€œthe weakening of the rules-based multilateral trading system, embodied by the WTO, that the US was instrumental in setting up,â€� said Prasad.

That could make it more difficult to achieve much in the way of cooperation to support and sustain a recovery in the global economy from the novel coronavirus crisis.

US journalist Alden does credit Trump with successfully renegotiating theÂ North American Free Trade Agreement with Canada and Mexico, an effort that was supported by both Democrats and Republicans.

CEPIIâ€™s Jean also credits Trump with changing the dynamic concerning China, which helped the EU change its policy towards Beijing, including several European countries joining the US in banning 5G mobile equipment from Chinese manufacturer Huawei.

The Brussels-based European think tank Bruegel said it believes that a Biden victory would mean a return to more courteous US style of diplomacy.

The positions of both Democrats and Republicans have hardened in recent years towards China, which is now viewed as a rival that needs to be contained as it has not evolved into a liberal market economy as had been hoped.

â€œUnder either candidate, the trade war is likely to spread,â€� said Vicky Redwood at Capital Economics.

â€œThe trade war was basically inevitable given Chinaâ€™s economic rise and persistence with high levels of state intervention rather than adoption of market forces,â€� she said.