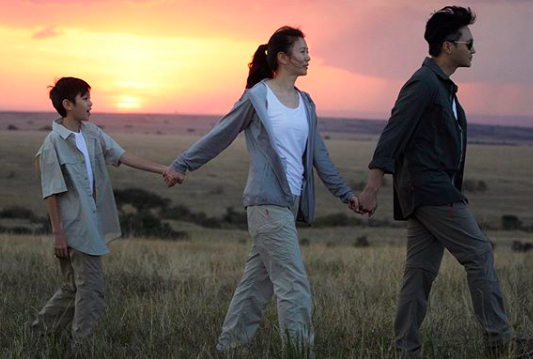 It appears that Morton is no longer a little boy. It was reported on Wednesday (Oct 7) that when Yuen recently returned to Hong Kong after completing filming for a new drama in Shanghai, the actress went out for some retail therapy. And who better to accompany her than 13-year-old Morton?

Photos of them on their shopping trip surfaced online soon after. Morton looked like a very bored tween during the outing, with his eyes on his phone throughout the trip, while Anita looked like she was enjoying herself, engaging in conversation with the sales assistant.

Eagle-eyed netizens pointed out that Morton had grown significantly taller in the past year.

The last photo Yuen posted of Morton, which was uploaded in July 2019, showed that he barely reached her chin. He now appears taller than his mother, who is 1.7m. Morton’s father is 1.8m tall.

The shopping trip photos also showed that Morton is very thoughtful. He was carrying his mother’s purchases when they left the mall.

On Sept 25, Yuen posted a photo of Morton heading off to school but he appeared  embarrassed by her show of support, putting a simple “why” on her post. However, netizens were excited by the post. It appears that Yuen had uploaded a similar photo six years ago of Morton leaving for the first day of school. These posts give netizens an opportunity to compare his growth over the years.