Tala Alamuddin Le Tallec was sentenced to three weeks’ jail and ordered to pay a fine of S$6,400 on Monday, October 14.

She was also disqualified from holding or getting all classes of driving licences for four years when she is released.

This is not the first time she has had run-ins with the law for alcohol-related offences, as she was fined S$3,000 and given a two-year driving ban in 2013 for drink driving.

The 47-year-old did not have a driving licence and had taken her husband’s car without his consent.

When she was caught at about 2.30am on May 14, she had more than twice the prescribed limit of 35 micrograms of alcohol in her blood, a report on TODAY stated.

Following her first drink-driving conviction in April 2013, she did not reapply for a Class 3 driving licence in Singapore.

On the morning of May 14, she was stopped at a police roadblock. She had drunk two glasses of wine and a glass of champagne earlier that evening.

The police officer noticed that Le Tallec appeared to be having trouble finding the handbrake. He also observed that she smelt strongly of alcohol and could not promptly answer where she had been before.

She also failed a breathalyzer test that morning. 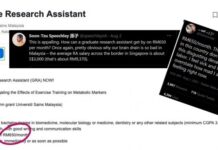