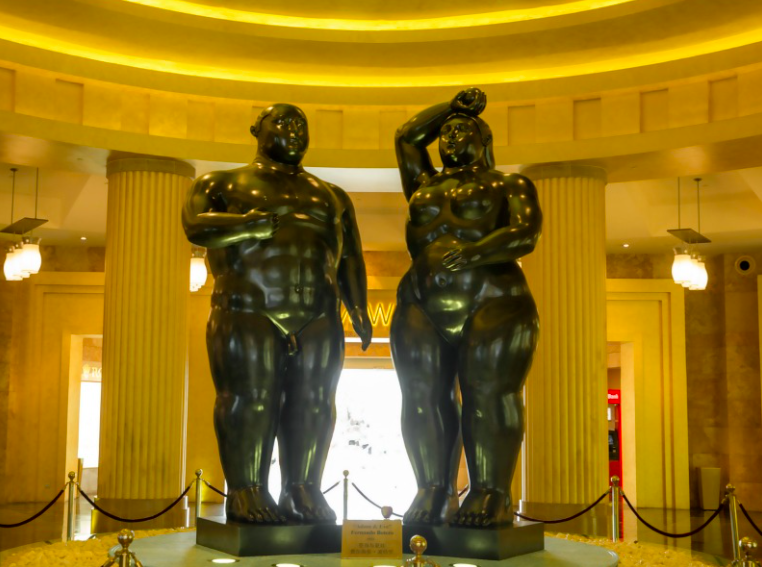 Singapore—One guest at Resorts World Sentosa (RWS) had an unusual complaint about the statues found at Hotel Michael, expressing concerns about their ‘huge private parts.’

In response, RWS has said that the artist responsible for the statues is known all over the world for sculpting figures that are, shall we say, ‘larger than life.’

The guest, who is only identified as “Ramon,” told crowdfunded news site Stomp how “shocked” he was to see the naked statues in the lobby of Hotel Michael, a pair in bronze entitled by renowned artist Fernando Botero as “Adam and Eve.” Ramon said, “The statues are indecent and there are so many children around.

Their private parts are huge too. It should be small if it is art.”

A representative from RWS told Stomp, “The artwork – Adam and Eve – by renowned Colombian artist Fernando Botero is displayed near the entrance to Hotel Michael at RWS.

Mr Botero is known for depicting objects in oversized and exaggerated dimensions which has remained his signature style across his many renowned sculptures and art pieces.

Since RWS opened ten years ago, we have showcased many famous art pieces by acclaimed artists across the destination resort such as ‘Space Elephant’ by Salvador Dalí, ‘The Thinker’ by Auguste Rodin, and the ‘Armonia Chandeliers’ by Dale Chihuly.”

Mr Botero, who hails from Medellin, Colombia, is known the world over for the voluptuous figures he features in his artwork, not just of humans, but of animals as well.

The artist is so famous for his full-figured works in both paintings and in sculpture that a style, “Boterismo,” has been named after him.

In Singapore, his massive “Bird” statue has graced the UOB Plaza near Raffles Place along the Singapore River for thirty years now. And The St Regis Hotel at Tanglin Road has more than one Botero statue. The wife of owner Kwek Leng Beng, Cecilia Kwek, is an avid art collector. The hotel’s entrance is graced by a monumental sculpture of a reclining woman, and guests are also treated to a “Dancing Couple” perched on top of a table.

Mr Botero is not only one of the most prolific artists in the world, with his work displayed prominently in various places such as London, Armenia, Spain and Liechtenstein, he is also one of the world’s wealthiest, with a net worth of around US$215 million (almost S$300 million).

Mr Botero once famously said, “Sculptures permit me to create real volume. One can touch the forms, one can give them smoothness, the sensuality that one wants.”

In another instance, in talking about his art, he said, “An artist is attracted to certain kinds of form without knowing why. You adopt a position intuitively; only later do you attempt to rationalize or even justify it.” —/TISG

Majority of retrenched workers in Resorts World Sentosa were foreigners

India, Oct. 24 -- There's no wonder that Michael Jackson's moonwalk is one of the coolest dance steps one...
Read more