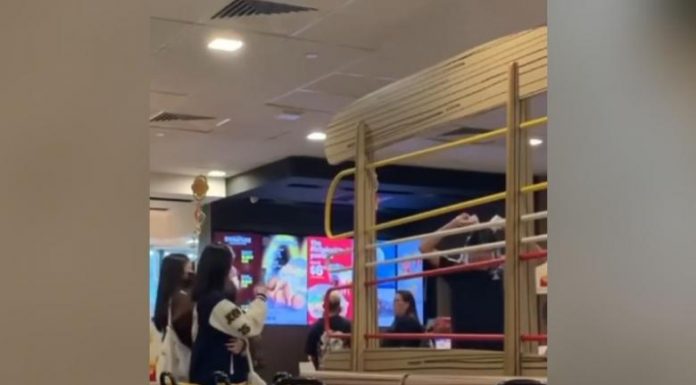 A video posted by an Instagram group, Singapore Incidents, has riled up some Instagram users. The video featured several youths doing pranks at the McDonald’s in SAFRA Punggol.

The video showed a boy holding two small cups of water before strutting from the the counter in the McDonald’s outletto a table. Two girls are seen filming him, as he removes his mask and hands to one of them. The teen then goes on to pour water on himself, from head down. When he is done, the trio run out of the fast food restaurant.

The Instagram Group in their caption said: “Hi, i would like you to help expose an inconsiderate act conducted by a group of YPs at Punggol SAFRA McDonad’s. First, one of them bought ice cream then slapped it on his own face, throwing the remaining on the floor, creating a mess. Then, they requested for 2 cups of water for another one of their stupid pranks, which he poured over himself in the store, creating a puddle of water and the poor old uncle had to clean after their mess (on top of that, they did not clear their trays).”

The group shared several pictures of the aftermath of the teenagers pranks as well.

The video of the teenagers prank has gone viral with over 6,400 views.

One Instagram user perhaps described the prank by the teens best. He said: “Stupidity has no cure…”

In November last year, what a youth did for laughs as a prank on an intercom operator backfired when the latter threatened to call the police. In a 54-second-long video posted on Facebook, the teen can be seen pressing the button of a carpark intercom and asking: “Can I get two McSpicy meals?”. But the man on the other end of the line was clearly not in the mood for jokes.

Many Facebook users criticised the youths’ actions, with some questioning why they did that while others tried to defend them for being “young and curious”.