Jessi flaunts off her curves, saying “You can’t refund this view”. 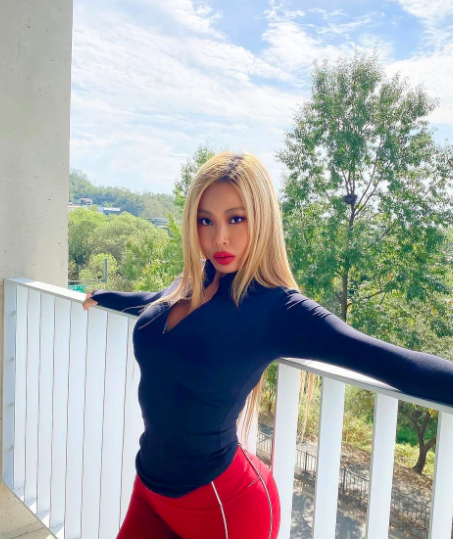 K-pop star Jessi recently took to Instagram to flaunt her perfect ‘thicc’ figure. On October 13, she posted two pictures with the caption, “You can’t refund this view”. Jessi was seen posing with scenic nature in the background.

She posed confidently against a railing and flaunted a trim yet curvy figure sculpted through exercise. Her body’s perfect curves received attention while netizens were impressed by her curvy figure.

Jessi is stunning with her blond hair, intense smoky makeup and bright red lipstick that matched the crimson leggings she was wearing. Jessi is appearing on MBC’s Hangout With Yoo with Uhm Jung Hwa and Lee Hyori.

Born on December 17, 1988 as Jessica Ho, Jessi is an American rapper, singer, and songwriter based in South Korea. Jessi was born in New York, raised in New Jersey and moved to South Korea at the age of 15.

In 2003, Jessi successfully auditioned for Doremi Media and moved to South Korea. She released her debut single album Get Up in 2005 and performed the title song “Get Up” on the TV series Music Bank. In 2006 the hip hop group Uptown featured her in their album Testimony, replacing their original vocalist Yoon Mi-rae.  Jessi’s second single album, entitled “The Rebirth”, was released in January 2009. After the release, she took a break from music, and left Korea to return to America.

In 2014, after a 5-year hiatus, Jessi returned as a member of hip-hop trio Lucky J with rapper J’Kyun and vocalist J-Yo. Lucky J debuted with the digital single “Can You Hear Me” under YMC Entertainment in July of that year. A month after their debut, Lucky J made an appearance in Mnet’s music competition programme, Immortal Songs 2.

However, she chose not to become part of the label, as she believed its approach to music did not match her style. Before Jessi went on temporary hiatus from the music industry, she struggled to become accustomed to Korean culture. She did not find immediate success after her debut, and was sometimes forced to sleep in saunas when she did not have enough money for a place to stay.

In 2013, during her break from the music industry, a controversy about Jessi’s involvement in an alleged assault surfaced. The professed victim soon dropped the charges against the singer, and the investigation was closed.