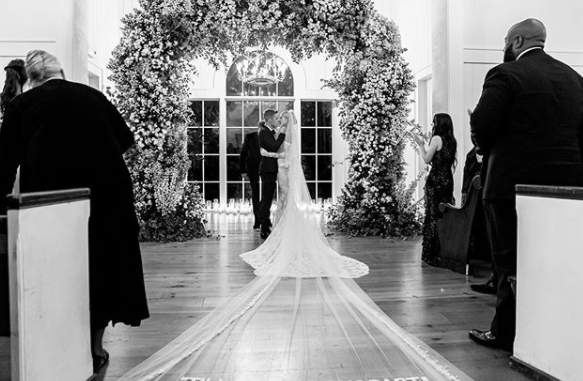 Congratulations are in order for Justin Bieber and his wife Hailey Bieber as they celebrate their wedding anniversary on Wednesday. The singer said that he was lucky to be Hailey’s husband and that he promises to put his ‘sweet girl’ first.

The Sorry hitmaker and Vogue model uploaded beautiful black and white images from their wedding on Instagram. Hailey said that she hoped she can relive their wedding day. The two of them tied the knot for the first time at a courthouse in NYC on September 13, 2018. About a year later on September 20, 2019, they held a big wedding at the Montage Palmetto Bluff, a 20,000-acre luxury waterfront resort in South Carolina.

Justin gushed over his wife, saying that he is lucky to be her husband. He said that she has taught him so much and has made him a better man.

“I am committed for the rest of our lives to empower you to be the woman God has called you to be!

“My heart is to enable you to achieve all of your wildest dreams!”

Then he said he would never take the catwalk queen for granted: “I promise to always put you first, to lead with patience and kindness!! Happy anniversary my beautiful sweet girl.”

Hailey then had her say: “1 year ago we had the best wedding. Wish I could live this day over and over.”

This was followed after Bieber and Chance the Rapper announced that they are giving away USD250,000 to fans in need. The two celebrities have chosen to celebrate their collaboration Holy reaching number one on the iTunes chart by aiding those affected by these hard times on Cash App, urging those who are in need of financial aid to share their stories on social media.

Bieber and Chance posted the same posts on their Twitter and Instagram accounts which read: “Thanks for the love on Holy.”

“[We’re] partnering with Cash App to give away a total of $250k today to those affected by these hard times.

“Tell us your story if you feel like sharing. To enter drop your $cashtag & use #JBChanceHoly.”

A fan named Katy messaged Justin to share about the damage her home suffered due to Hurricane Laura last month and she was rewarded USD500 after that.

She tweeted: ‘my house, my mothers house, and my boyfriends house all suffered so many damages indoor and outdoor from #HurricaneLaura on august 27. anything is greatly appreciated.(sic)’

She then shared a screenshot of the donation and wrote in another tweet: ‘JUSTIN I AM SOBBING AND SHAKING AT WORK YOU HAVE NO IDEA HOW MUCH THIS WILL HELP US! Thank you SO MUCH! I COULD NEVER THANK YOU ENOUGH! LOVE YOU SO MUCH! #JBCHANCEHOLY.(sic)’

Many left messages on the platform showing their delight for Bieber and Chance for helping them out with college tuition, debts, support for their families and other reasons.

The two stars dropped Holy, – the first song from the 26-year-old crooner since his studio album Changes which was released in February – a week ago. The Believe hitmaker said at that time he was heralding in a new era with the gospel-tinge collaboration.

If U.S. President Donald Trump is struggling with poll numbers that show him behind Democratic contender Joe Biden, he...
Read more

“Jail the bankers,” experts urge in the wake of FinCEN

The International Consortium of Investigative Journalists exposed the FinCEN Files, bringing to light how banks and regulators have failed...
Read more