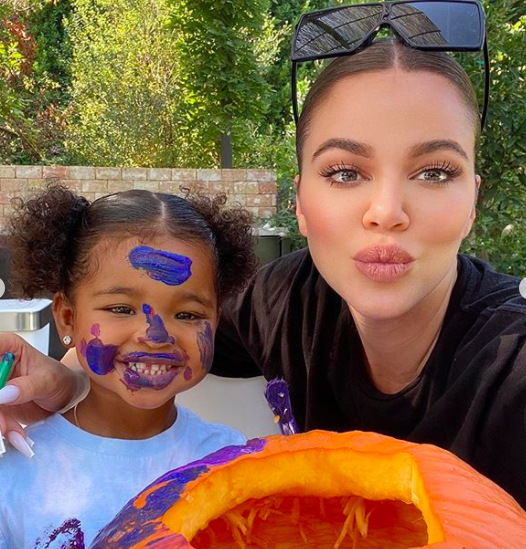 Reality star Khloé Kardashian and Tristan Thompson are celebrating Halloween with their daughter True. Last Saturday (Oct 4), the Good American co-founder, 36, uploaded Instagram photos from an autumn-themed family party where True, 2, was seen painting her pumpkin blue as her father, Thompson, 29, helped her out.

“Tutu, what are you doing?” Kardashian asked in one clip as True painted her pumpkin blue. As the camera panned to Thompson, Kardashian also called out his messiness.

“Dad, you got it on your face,” she said, as both Thompson and True showed off their blue hands. Besides getting into the Halloween spirit with her parents, True also had fun painting away the afternoon with cousins Chicago, 2 and Psalm,1, the youngest of Kim Kardashian and Kanye West’s four kids.

Former lovers Kardashian and Thompson have been spending quality time together over the past few months. Scott Disick hinted in August that the couple had reconciled. In February 2019, Kardashian broke up with Thompson when the Cleveland Cavaliers power forward was accused of cheating with Jordyn Woods, Kylie Jenner’s former BFF. Since then, Woods has moved on with fellow NBA star Karl-Anthony Towns.

From September 2009 to October 2016, she was married to basketball player Lamar Odom, whom she married one month after they first met. They starred in their own reality television series, Khloé & Lamar (2011–2012). In 2009, Kardashian participated in the second season of The Celebrity Apprentice, finishing 10th out of 16 candidates after being fired by Donald Trump. In 2012, she co-hosted the second season of the US adaptation of The X Factor with actor Mario Lopez.

She is involved in the retail and fashion industries with her sisters Kourtney and Kim. They have launched several clothing collections and fragrances, and additionally released the book Kardashian Konfidential in 2010. They starred in their own short-lived reality television series, Dash Dolls (2015).

In 2016, she hosted her own talk show, Kocktails with Khloé, and starred in the health and fitness docu-series Revenge Body with Khloé Kardashian.