EntertainmentCelebrityHere are some of the major Korean celebrity breakups

Here are some of the major Korean celebrity breakups Even though they have fame, celebrities like us also go through heartbreak due to breakups. They could be in long-term relationships or a short fling but sometimes all things can come to end. Some of us fans do hope that our favourite celeb couples stay together but unfortunately, it is not always a fairytale ending. Here are some of the Korean celebrity breakups in recent years. It is so adorable that the former couple shares the same surname so some people nicknamed the duo Song-Song. They first met on the set of Korean drama Descendants of the Sun back in 2016. On July 2017, the beautiful pair then got engaged and in October 2017 of the same year, they got hitched. However, in 2019 the couple got divorced. Goo Hye Sun, who rose to fame after starring in the hit Korean drama Boys Over Flowers was married to fellow actor Ahn Jae Hyun. The couple got married in May 2016 and in September 2020, Ahn filed for divorce. The divorce was finalised 10 months after it was filed by Ahn. Both Ahn and Goo were not present in court but were represented by their lawyers. Lee Min Ho is arguably one of the most popular actors in South Korea. He and actress Bae Suzy dated for two years from 2015 to 2017. The couple were spotted in London together and following that, they became an official couple. Lee and Bae’s relationship was strong despite busy schedules. In 2016, Lee and Bae were seen wearing couple rings.

Unfortunately in November 2017, the couple called it quits due to personal reasons. It is believed that their relationship went sour after Lee got enlisted to serve in the military. 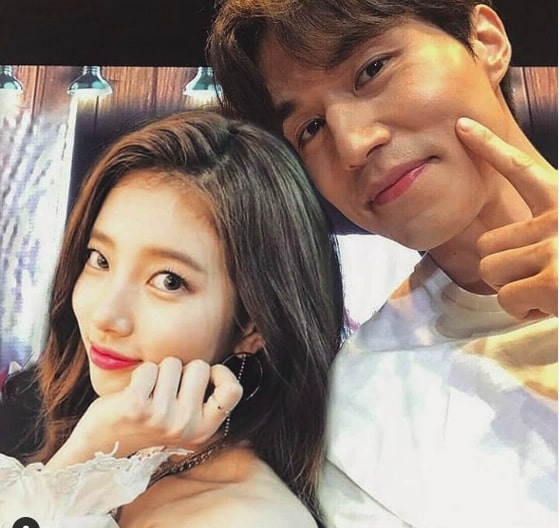 Bae Suzy is featured on this list again! Lee Dong Wook, who is known for his roles in Goblin as well as The Tale of the Nine-Tailed also dated the attractive Bae Suzy. The couple started going out in March 2018. Lee and Bae first met each other at a cosy gathering and from there, they fell for each other and started to date. It was reported that Bae named Lee as her ideal man during a 2012 interview. It was Bae’s positive and down-to-earth personality that attracted Lee to her. The couple broke up in June 2018 due to their hectic schedules. Despite having a four-year age gap, with Lee being born in 1990 and Nam born in 1994, it did not stop the couple from getting together. The pair worked on the series Cheese In The Trap (2016) as minor characters and then later on in Weightlifting Fairy Kim Bok Joo (2016 to 2017). Nam shared in a press conference in January 2017 that he was ready to date. Nam and Lee became official on April 2017 after dating rumours surfaced. Their relationship was short-lived and in August 2017, it was reported that the couple has broken up. Kim Go Eun is known for her breakout role in Korean drama Goblin. In March 22 2017, the actress and her boyfriend Shin Ha Kyun called it quits after dating for eight months. According to a rep from their agency, “The pair broke up around late February. They drifted apart due to their busy schedules. They will remain colleagues.” The couple had a 17-year-age gap with Kim being born in 1991 while Shin was born in 1974.