It’s been more than a year that reality star Kylie Jenner became a mother. The Keeping Up with the Kardashians star and entrepreneur gave birth to her first child Stormi on  Feb 1, 2018.

Unfortunately, though, Kylie and Stormi’s father is in a rough patch right now.

Kylie Jenner and Travis Scott called it quits on Oct 3. Jenner is talking openly about what being a mum has been like for her despite splitting from Travis Scott. 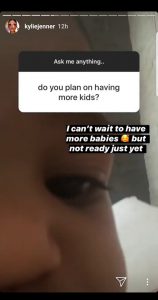 The 22-year-old is certainly grateful to be a mother. She even shared personal details like stretch marks on her Instagram Stories feed.

Jenner started a Q&A session with fans, posting “Ask me anything.”

She did a good job choosing which questions to respond to, picking ones that were personal. The topics were about her daughter Stormi and motherhood although some were about her Kylie Skin facial care brand.

In 2016, Jenner started her first brand Kylie Cosmetics. An article in Forbes published in March 2019 estimated that her company is worth at least $900 million.

Jenner has already pulled from the profitable business, and the 21-year-old is now a billionaire.

Even though Travis Scott is not by her side, Jenner can take care of herself and her daughter Stormi.

The Q&A started with Jenner’s “Ask me anything,” but her answers to fan questions got deep into some details.

She answered one fan question about her fave food, and apparently, she is a sushi fan. 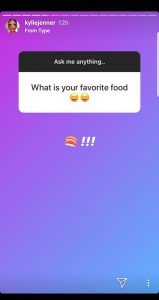 But then she dove into questions about motherhood and pregnancy that were much more candid and personal.

One user asked her if it was “hard getting back in shape after [her] pregnancy,” to which Jenner responded that she “snapped back pretty fast but it was never the same and still isn’t.”

And according to a question about pregnancy cravings, Jenner really loved Eggo waffles while she was carrying Stormi.

Followers also learned that Jenner loves the name “Rose,” and considered that along with Stormi. And, shocker here, she admitted to having stretch marks and says she’s “accepted them as a little gift from Stormi“.

However, the question that really takes the cake is whether Jenner is planning on having more kids.

So, is it safe to say that the world can expect more little Jenners? It’s looking like it. Kylie admitted she “can’t wait to have more babies” so I don’t think it can be much more clear than that.

But it’s best to remember that since Jenner split from Travis Scott, there may be a bit of a wait until she’s ready to have another bun in the oven.
Since TMZ first announced that Kylie Jenner and Travis Scott are taking a break on Oct 1, rumours and speculation ensued.
Jenner took to her Twitter to set the record straight, saying that she and Scott are still “on good terms.”

However, an insider told E! News on Oct 10 that Kylie Jenner and Travis Scott may get back together. Fans will just have to watch and wait on that one. It’s a little early, and definitely too hard to say for sure.

Jenner first announced her pregnancy via Instagram after Stormi was born. Being in the spotlight is probably hard enough without adding in the pressures of a public pregnancy. It’s no wonder she wanted to keep her stress levels low by keeping Stormi a secret until after the birth.

Whether Kylie and Travis Scott get back together in the future is still unclear. But in any case, Jenner will obviously do what’s best for Stormi. And who knows, maybe she’ll decide she wants more kids sooner than she thinks.

But odds are, it’s will probably be awhile before Kylie Jenner has any more babies.