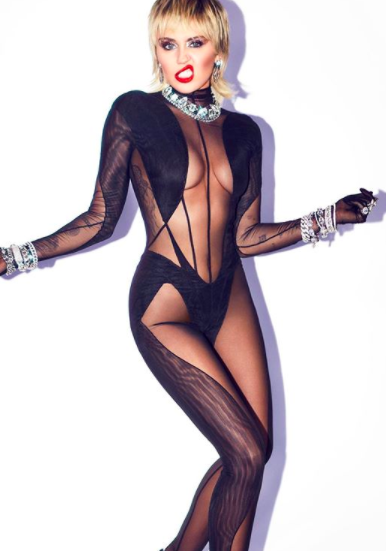 Actress-singer Miley Cyrus is living it up after her breakup from boyfriend Cody Simpson. The Midnight Sky hitmaker jammed out to Joan Jett while stripping in front of the camera and joking that being single gives her “more alone time” for that kind of fun.

She was seen unbuttoning her pants and biting her lips while topless to Joan Jett’s Do You Wanna Touch Me in the background. Cyrus captioned it, “Hard days night.” She then shared a fan’s edit of her Instagram Story on her main feed with the caption: “Bad a– edit f– yeah.”

Her Instagram post garnered supportive comments from fellow celebrity friends such as Vanessa Hudgens who wrote, “So hot” and Jeremy Scott wrote, “HOT TAMALE!” Cyrus has been flaunting her sexy side since her relationship of a year concluded his summer. She dedicated her cover of Maneater to her “future ex-husband” while appearing on The Tonight Show on Sept. 10. “I think it’s very important to be transparent,” she said on the show. “I’m freshly single, so anyone watching that’s my future ex-husband, just know, I told you.”

The Hannah Montana alum opened up on the Call Her Daddy podcast about what she is looking for in a partner. “I usually end up complaining they’re boring, but that’s what I need. I need boring,” she explained in the Aug. 16 episode. “I definitely, definitely need a calming, I need an anchor, I need a weight.”

“One of the things that’s important to me in a relationship, besides acts of service, [is] I like people taking care of themselves,” she continued. “I think the way someone treats himself is a reflection of the way that they’ll treat you. I’m, like, super into clean eating; I’m into people taking care of themselves.” As someone who is living a sober lifestyle, Cyrus said she feels like she is “wasting her time” with people who aren’t on the same path as she is. “You can really control the kind of people who are going to flow in and out of your life, and you can create a filtration system,” she said. “So I’ve filtered my life of what I will accept and what I will not.” /TISG