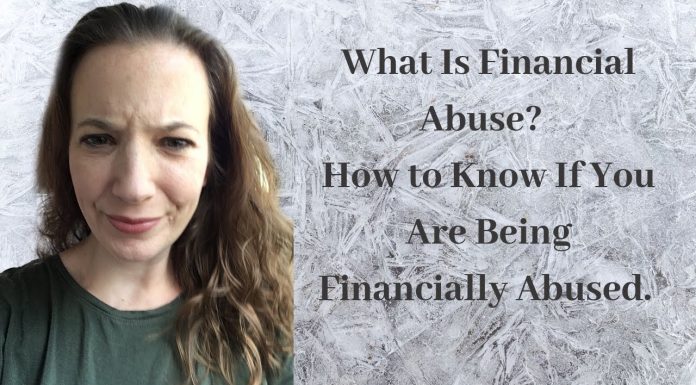 When people think of the word abuse, the image that we conjure up in our mind is often physical or mental abuse never economic. Financial abuse is a real thing and can have devastating consequences.

How is financial abuse defined? Basically it occurs when someone controls the victim’s ability to acquire, use or maintain financial resources. Victims are often prevented from working.

In addition to that the use of their own money is often restricted or stolen. Rarely do they have complete access to their money and other resources and any money they do spend has to be accounted for to the controlling person.

Tactics that are used can vary from covert and manipulative to situations that are overt, demanding and intimidating.

Victims also often have sketchy employment history, no credibility with the banks and legal issues which makes long term security a challenge.

Example of exploitation include

Financial abuse can happen to anyone, at any time, regardless of whether they’ve been married to their partner for years or are entering a new relationship. It can also happen within families where one member of the family controls the finances, for example a controlling parent or an older sibling though it is more common in the context of relationships between romantic partners and husband and wife.

The impact of financial abuse can be felt long after you’ve left an abusive situation. Kim Pentico, director of economic justice programmes for the National Network to End Domestic Violence (NNEDV), said financial abuse is “devastatingly effective because it’s often not illegal.”

Money is and always will be an uncomfortable topic but it’s a vital first step to talk to someone about it to realize you are being financially controlled as it isn’t always obvious to the person involved. An honest conversation with someone you can trust will help you ascertain this.