InternationalAsia PacificNetizens ask if they’re expected to ‘eat steamboat & such with their... Petaling Jaya — Former Malaysian Prime Minister Mahathir Mohamad launch a new book Capturing Hope: The Struggle Continues For A New Malaysia on Sunday (Dec 12), but managed to infuriate some and puzzle others in a comment he made connecting chopsticks and national identity.

“They (Chinese) have not adopted the Malaysian way of eating food. They retained the chopstick, which is an identity from China, not Malaysia, and many other things.”

“The Chinese eat with chopsticks, they don’t eat with their hands,” he said.

Sticking to using chopsticks, instead of their hands, causes division, he asserted.

The 96-year-old Dr Mahathir also said that the Chinese in Malaysia “are not like their great-grandfathers who actually were born in China and came here.”

Instead, “They are born here, brought up here, grew up here, but they still link to (their ancestral roots). So this divides the people.”

He went on to say that people back then identified themselves as ‘Chinese Malaysian’ or ‘Indian Malaysian,’ and because they cling to their racial identity, “they cannot be assimilated.”

He also noted at another point that “others do not want to identify themselves as Malays.”

Dr Mahathir’s remarks on race and identity may be heard at around the 20-minute mark.

Responding to the former Prime Minister’s remarks, DAP secretary-general Lim Guan Eng said he found them simplistic and offensive to the Chinese community.

“Tun is wrong to focus on assimilation instead of integration and that using chopsticks instead of adopting the Malaysian way of eating with their hands is one of the reasons leading to separation amongst the people,” he said, suggesting that Dr Mahathir should be reminded that not only China and Taiwan use chopsticks but also South Korea and Japan.

And PKR Sarawak election candidate Cherishe Ng said that “As a Chinese, I feel insulted by his comments and he should not have said such a thing. Chopsticks have a 4,000-year heritage and (their use) is very common today.” 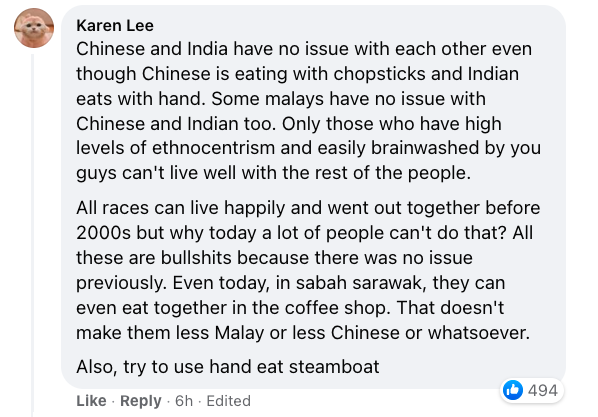 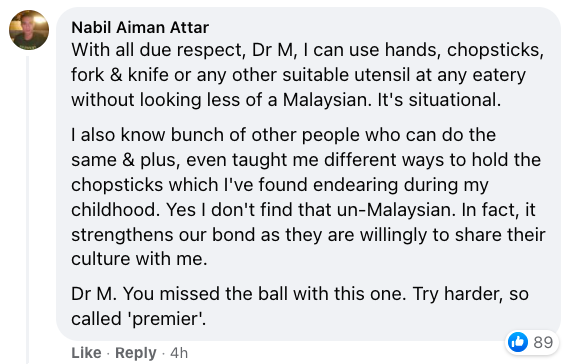 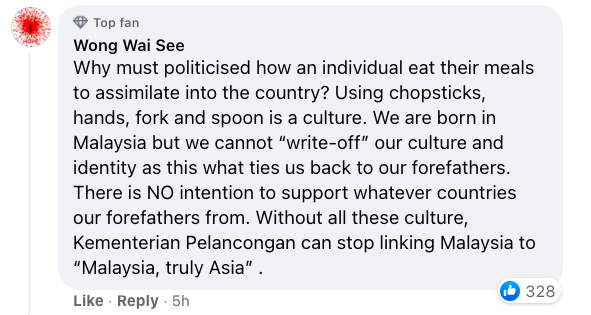