The Prime Minister, who is known to take and post photos of ‘jalan jalan’ or walking about, shared an album on his Facebook account of the sights and sounds of Seoul on Sunday, November 24, just before he left for his meetings in Busan.

Many of the photos had been taken by PM Lee himself. He wrote,

“Had some time to explore Seoul before going to Busan for the ASEAN-ROK Summit.

Met many Singaporeans during my #jalanjalan — all enjoying the brisk weather and beautiful sights of late autumn in Seoul. – LHL”

However, one shot not taken by the Prime Minister was that of himself and his wife at the “Champs-Élysées” of Ewha Womans University.

This photo seems to have charmed netizens, who have reacted to, commented on and shared it more than any other photo in the album. Netizens showed their delight at the unusual photo, sighing a collective “Awwwww” at the sight of PM and Mrs Lee in such a playful and sweet pose. 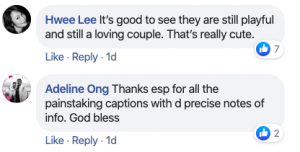 One netizen remarked that they are soulmates indeed.

Others implied that it’s good for the PM to have fun.

Another commented that they are “good support for each other.”

One commenter said that she’ll try out the pose herself one day.

However, perhaps because people are people, one netizen seems to have not found it possible to give Mrs Lee some sartorial advice, telling her to wear white shoes next time instead.

Others poked some mild fun at the couple, saying that it reminded them of the child’s game of London bridge.

One netizen summed it up for the others by calling it “the best shot of all.”

On Tuesday, November 26, the Prime Minister wrote that he was “looking forward to a fruitful summit with President Moon and fellow ASEAN leaders!”

On this trip to South Korea for the ASEAN summit, along with PM Lee are the following: Dr Vivian Balakrishnan (Minister for Foreign Affairs); Tan Wu Meng (Senior Parliamentary Secretary Foreign Affairs, Trade and Industry),  and various officials from the Prime Minister’s Office, Ministry of Foreign Affairs, Enterprise Singapore and Health Sciences Authority.