Former 2NE1 member Park Bom walked the red carpet at the recent 56th Grand Bell Awards in a beautiful two-piece outfit but something else caught the attention of many people.

It was the 36-year-old’s face. It was puffy and a far cry from what it used to look like.

D-Nation, her agency, later released a statement to address rumours that the singer had undergone plastic surgery. It said the star was going through tough times and was stressed.

The agency said that it had assured her to be comfortable until the release of her next album. It seems Park Bom was going through some weight gain, which could be seen on her face too. The singer has stopped work for now.

A source from the label told Star News that allegations that Park Bom had gone under the knife were not true. The singer had been working on a new album and was taking care of herself to present a new look. 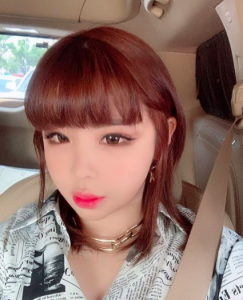 It is reported that last year was a busy year for her and her stamina was low because she had been performing as a solo artiste. She has since been resting and eating well and her health has improved.

The entertainment industry is strict when it comes to the looks of artistes and this can be detrimental for them.

Born March 24, 1984, Park Bom is also known as Bom. She was previously part of South Korean girl group 2NE1. In 2006, she started her musical career by appearing in singles with label-mates Big Bang, Lexy and Masta Wu. She then debuted as a member of 2NE1 in 2009 as the lead vocalist. She released two solo singles, You and I and Don’t Cry and they topped the Gaon Digital Chart. Park Bom also was awarded Best Digital Single at the 2010 Mnet Asian Music Awards.

When 2NE1 disbanded in 2016, Park Bom left YG Entertainment and signed on to D-Nation Entertainment in July 2018. She then launched her solo single, Spring. /TISG