Asia Singapore NTUC Fairprice comes under fire after it clarifies that mislabeling was not... 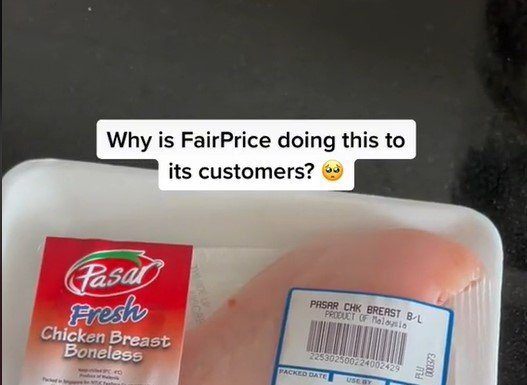 On 5 February, TikTok user Nina Monzolevska said that NTUC FairPrice had mislabeled a piece of chicken breast she bought. The TikTok user, a 23-year-old Ukrainian model currently residing in Singapore, said that as result she was charged a higher price.

The label stated that the chicken breast was 0.224kg, but when Nina re-weighed the piece of meat at home, it showed that it was only 0.165kg. 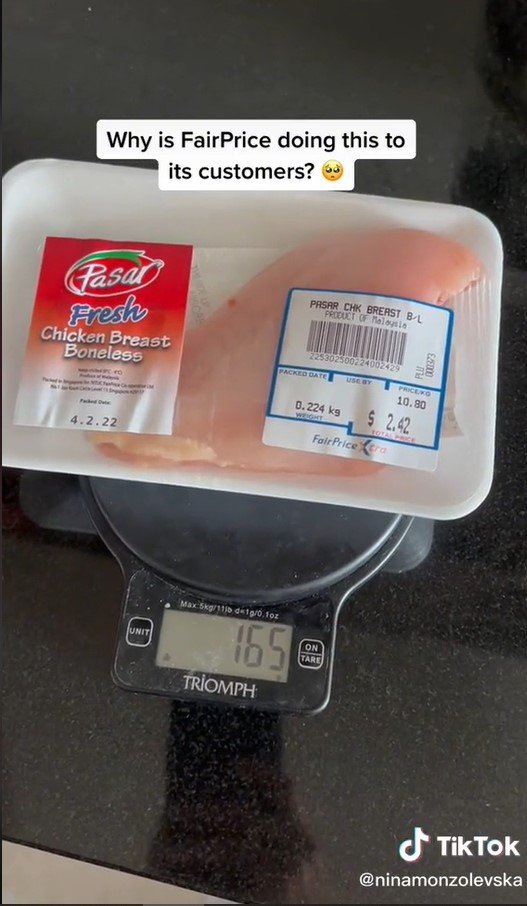 The post by Nina quickly went viral, which prompted a swift response from NTUC Fairprice. Writing on their Facebook on February 5, the Government-backed mega supermarket chain said that “ensuring product integrity, which includes accurate labelling is of paramount importance to (them)”.

On 7 February, the supermarket-chain published another post on their Facebook letting its customers know that it has “since contacted the customer to address her concerns and investigate the cause of the alleged mislabelling.”

It added, “We agree that such an error, should not have occurred. Our staff at the frontline are working hard, and we ask for patience and understanding during this challenging time. All our weighing scales are also independently calibrated by authorised vendors certified by the authorities.

“We understand another video with a price label pasted over an erroneously printed label was posted by the customer suggesting possible dishonest practices. While we appreciate feedback for improvement, we do not condone any unethical business practices and take such allegations very seriously. We will safeguard the integrity of our reputation against false allegations if necessary.

“We advise the public not to circulate unverified claims which may cause unnecessary public alarm. We appeal to customers to contact us directly so we may address their concerns expeditiously and avoid any misunderstanding.”

Many Facebook users who responded to the clarifications of NTUC Fairprice criticised it for the “many excuses” it loaded its apology with.

Readers pointed out that if it was a genuine apology, it “should not have come with a bunch of threats”. Other readers asked why NTUC Fairprice was suggesting that the claims of mislabelling were not unverified. “So it’s verified wrong weigh tagged, correct?”

“We are not asking for NTUC to fire any staffs involved but we the consumers, want explanation on why this is happening…how NTUC is going to prevent such thing from happening (in the future).”

Some readers asked why instead of apologising outright for their mistake, the supermarket was sidetracking into something which is totally irrelevant.

One customer said that he had highlighted wrong price tag on several occasions and was refunded the difference. “I wonder how many did not check the receipt,” he asked.

By the time NTUC published its additional clarification on Facebook, users were already checking if its weight labels on its items for are accurate. One TikTok user posted a video of him checking the weight of an item he intends to buy at NTUC Fairprice.

In July last year, a customer of the supermarket chain took to took to social media after discovering a discrepancy in price labelling for a chilled fish. According to the customer a red label printed on July 23 was pasted over a blue label, but the price on the red label was more expensive. The customer said: “When the discounted price is costlier than the actual price.”

The complaint is no longer viewable on Facebook, but NTUC Fairprice in responding to that message urged its shoppers to alert staff members immediately when they encounter such situations so they can rectify the error promptly. They said that accurate labelling is of “paramount importance” to them.