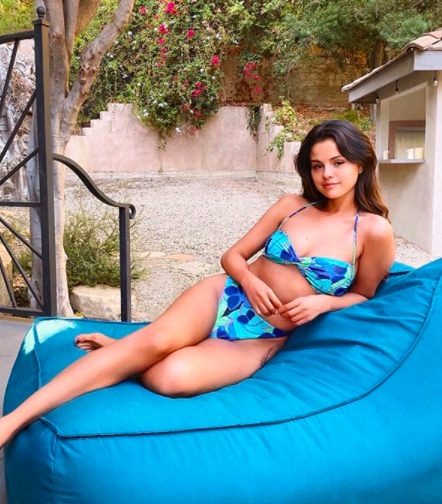 Autumn may have arrived on the East Coast but crooner Selena Gomez is channelling the spirit of summer on Instagram.

She was modelling La’Mariette’s Caroline bikini top on the swimwear line’s account. Gomez looked amazing and sun-kissed with four white flowers in her hair. Theresa Mingus co-founded the swimwear line and she is a friend and former assistant of the star.

@selenagomez in the Caroline Top in print DAY TRIP

Selena Gomez went viral when she uploaded a photo of herself showing off her kidney scar in La’Meriette’s Selena one-piece.

When I got my kidney transplant, I remember it being very difficult at first showing my scar. I didn’t want it to be in photos, so I wore things that would cover it up. Now, more than ever, I feel confident in who I am and what I went through…and I’m proud of that. T – Congratulations on what you’re doing for women, launching @lamariette whose message is just that…all bodies are beautiful.

She also modelled the brand’s Caroline bikini top and bottom in a shot shared to the brand’s Instagram on September 4:

“This print was the catalyst for me to rebrand as La Mariette. It feels reflective of me- playful, vivid, and alive. Creating this new collection, it was imperative that every suit and print felt like an extension of me. This print for me feels like a memory. I get that same wash of nostalgia every time I wear it, it reminds me of a day trip Selena and I took when I was considering rebranding my company- we drove down to Newport and spent all day on a boat, laughing and wandering in and out of some incredible vintage stores. One of those days that when you look back you want to relive it. When I am working on a new collection, I don’t often look for inspiration on Instagram. More often I find that current of electricity from old photos of my friends’ moms, or dope old 80s/90s Sports Illustrated editorials- images where women look athletic and strong and very much real.” — @tmarie247

Mingus, who photographed Gomez in the one-piece, spoke to ELLE.com about that shoot earlier this month. Seeing her feel so empowered in La’Mariette’s one-piece, “oh, it felt so good,” Mingus said. “It’s funny because I actually took the picture. She knew exactly what she wanted to do. And that was the first picture that I took of her. I took 10, and that was the very first one. She was like, ‘that’s it.’”

“She was like, ‘I want to talk about my scar. I want it to be natural. I want it to be organic,’” Mingus continued. “And that was the suit she wanted to wear. We were on set for her all day, and then she whispered to me, ‘Hey, I think after this, we should go home and do a little photo shoot.’ And I was like, ‘okay, fine with me.’ She’s just so supportive.”

A trip Gomez and Mingus took together to Newport Beach inspired the “Day Trip” print of the bikini Gomez is wearing in the new shot, Mingus told ELLE.com, “We [Selena and I] were vintage shopping and we found all these cool suits. She was like, ‘You need to do a suit like this or a pattern like this.’ And then we had a really good day on a boat. It was super fun, but that had always been at the back of my mind. I didn’t want to do it [then]; the timing wasn’t right. I knew it would just be so good if we did it the right way.”