Shawn Mendes has just successfully wrapped his concert tour in Malaysia over the weekend.

The next day after the concert, fans spotted the 21-year-old Canadian hanging out at Suria KLCC.

The popular singer was seen walking around the mall alone – without the presence of any bodyguards or his PR – looking at ease.

The particular video of the Lost in Japan singer however, received significant spotlight online.

The 11 seconds clip features Shawn seemingly immersed while scrolling his phone as he went down the escalator. Out of the blue, a random man appeared and tried to snap a selfie with the pop star without asking for his permission.

Shawn moved away and left the man before he even tried to take a picture with him. The video went viral after a user known as Hariz Haiyyan pointed out the scene – expressing his disappointment towards Shawn and criticised him for being arrogant and rude towards the fan. Check out the full clip below:

Not all agreed with Hariz’s view though.

In fact, his tweet received massive amount of backlash among local netizens, with most of them defending the singer. Some pointed out that Shawn was wearing earplugs at that time, which indicated that he does not want to be disturbed. They further added that Shawn needed some “me time” after performing for an entire concert.

Additionally, they also commented on how rude that guy was to simply invade the award-winning performer’s privacy. Check out some of their replies here: 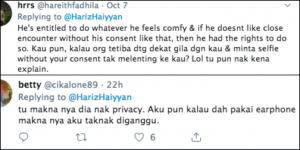 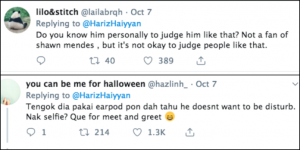 We’re sure that Shawn has his own reasons on why he reacted that way. As a fan, we should be more mindful of our favourite artiste’s private and personal space.

Born August 8, 1998, Shawn Peter Raul Mendes is a Canadian singer, songwriter and model. He started out by posting song covers on video-sharing app, Vine in 2013.

The following year, he caught the attention of artist manager Andrew Gertler and Island Records A&R Ziggy Chareton, which led to him signing a deal with the record label. He has since released three studio albums, headlined three world tours, and received several awards.