Rich Brian, whose real name is Brian Imanuel Soewarno debuted his hit single Dat $tick at the age of 16. The video has since racked up to over 132 million views on YouTube.

A production company, 88rising signed Rich Brian up. The company is becoming known as a label for Asian and Asian American music artists.

Now aged 20, the Indonesian rapper have performed in his home country and places like the US, Netherlands and Denmark.

Here is one of his more recent music videos.

At a recent concert, a fan of his caught the eye of Rich Brian and his hunt for love has captured the attention of many fans.

The rapper uploaded a photo to his Instagram stories. It was a screenshot of a video filmed during one of this concerts.

The girl in the front row had caught the attention of the Indonesian rapper.

Rich Brian wrote that the girl is ‘very cute’ and if she was reading this post, he ‘just wanted to let her know.’

In a following post, Rich Brian confessed that it may be more than a passing fancy and that he may have a crush on the girl.

You will be amazed by the power of social media.

In another screenshot of a selfie he posted online, Rich Brian said he has finally found the fan online

In the photo, he simply stated: “I found her y’all”.

Rich Brian also posted a screenshot of his Twitter, sending the girl a direct message where he started the conversation with an “O Hey”. 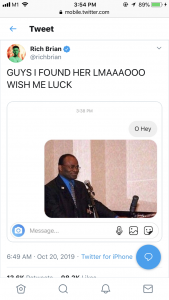 The 20-year-old seems serious about this mystery girl.

In a hilariously badly photoshopped photo, he shared that he was currently on his tour bus ‘making a song about her’. Rich Brian’s romance has become known on Twitter with a thread of the incident racking up to over 17,300 retweets.

On Twitter, some of the fans reacted with jealousy and envy and some compared this to the plotline of fanfiction.

One of the fans also enquired what the girl’s Instagram account was and Rich Brian just turned her away. 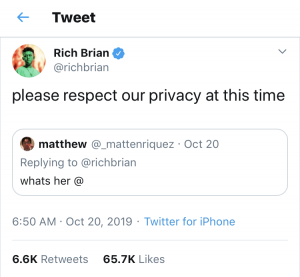 Most of the fans showed support to the rapper and were waiting for updates to the story.