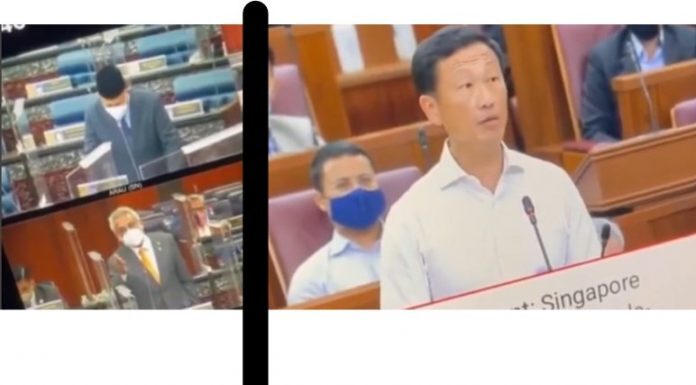 In response to this, netizens laughed along and exchanged jokes on the matter.

Netizens have held an interesting online dialogue comparing Singapore’s parliamentary sessions with those of its neighbour, Malaysia.

This follows a back-to-back video that was recently shared of a civil speech being delivered in a session in Singapore followed by what seemed to be more boisterous in a session that took place in Malaysia.

A Redditor with the handle @BluetoothEarpiece shared a video on the online news forum on Tuesday (Jul 27) that contrasted a scene from one of Singapore’s parliamentary sessions with one that happened in Malaysia.

While the first one featured a calm and collected Minister for Health, Ong Ye Kung speaking, the other showcased several Malaysian leaders speaking all at once over an online conference.

The difference between Singapore’s Parliament and Malaysia’s Parlimen (CR: sgfollowsall) from singapore

In response to this, netizens laughed along and exchanged jokes on the matter. Others made mention of other countries such as Taiwan and Korea, making reference to similar incidents in their legal sessions. However, other netizens took a much more serious tone.

Some used this forum as an opportunity to hold a conversation about culture.

“Malaysian here. While I get that politics in Malaysia has a reputation. As someone who managed to watch there were actually a lot of good points raised in the sitting,” wrote one user.

“I think an element of what’s going on is that most people understand OYK speaking English, but most posters here do not understand Malay and so the Malaysian parliament just sounds like loud gibberish which is easy to make fun of. So most people aren’t going to understand whatever good points are being made.”

Others said that it’s better not to “look down” on the political state of other countries.

Interestingly, some Singaporeans even called for more intense parliamentary sessions, saying that though that clip of the Malaysian parliament was “robust”, it was invigorating and showed authenticity.

For example, as one user wrote, “I’d love to see actual (and) spontaneous debates in our parliament than something scripted.