International The moment a woman got stuck in a transparent cruise ship water... 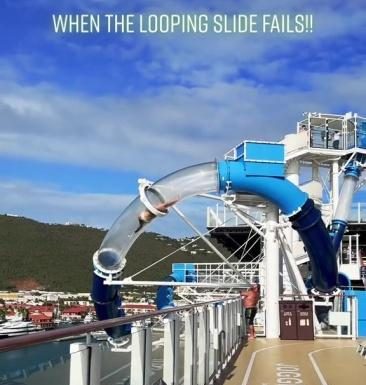 TikTok was abuzz with the fate of a woman who got stuck in a malfunctioning transparent waterslide on a cruise ship.

More people expressed their anxiety, flooding the comment section while watching the video.

A video of the woman trapped in the translucent water slide suspended above the ocean while on a cruise became popular on TikTok.

The video tweeted by @ymg travels shows guests on the ship deck watching with bated breath as a woman begins sliding down the water slide and around the loop, only to lose speed and plummet back down, becoming trapped at the bottom of the slide.

To make matters worse, the translucent slide dangles over the water, heightening the threat of calamity. When the woman understands what has happened, she steps away from the section that dangles over the sea. There doesn’t appear to be a way out and she is much like a fish trapped in a fishbowl, says some comments.

The video has been seen over 14 million times, and TikTokers have hurried to comment beneath it.

While another said: “I can’t keep watching. I feel like I’m suffocating.”

A third added: “My heart rate accelerated watching this. Stuck in a clear tube suspended over the ocean… NOPE!!!”

TikTok users stated that they do not ride waterslides because of the woman’s experience.

Others expressed embarrassment if they had become trapped. The incident took place on a Norwegian Cruise Line.