Blink-182 drummer Travis Barker paid tribute to his reality star wife Kourtney Kardashian by inking her eye’s on his thigh. The 47-year-old showed off the ink on Instagram over the weekend. 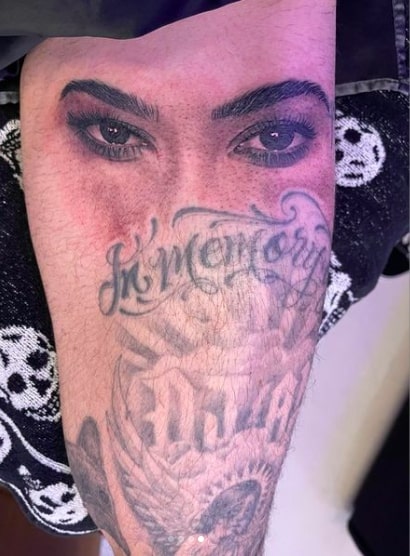 On Saturday, Barker captioned a series of photos with, “Oh hey there.” The shirtless musician revealed his new ink by lifting up his boxers in one of the snaps.

Travis Barker also uploaded a close-up of the ink and a snap taken by Kardashian which showed him hiding behind her derrière. Kardashian, 43 was dressed in a long-sleeved shirt dress and she looked like she was giggling as Barker grabbed her thighs and crouched to the ground.

The Poosh founder confirmed that the tattoo was certainly her eyes by reposting the photo to her Instagram Story with a flirtatious eye emoji.

The drummer has more than one tattoo of his wife

It is not the first time Travis Barker did an ink to pay tribute to the reality star. In 2021, he got a tattoo of her name inked to his chest when they first started dating.

He also added an “I love you” on his forearm. Kardashian was asked on “Today” about her favourite piece of ink on Barker’s body and she replied, “The Kourtney, of course.”

“I wrote ‘I love you’ in cursive language, and then I did it,” she added, revealing she tattooed Barker herself at the time.

The duo said “I do” three times

The couple were married in 2022, with a practice wedding with no license in Las Vegas, a legal wedding in Santa Barbara, California, and finally a lavish celebration in Portofino, Italy.

On May 15, 2022 they legally got married at a Santa Barbara courthouse, with her grandmother, Mary Jo “MJ” Campbell, and Barker’s father, Randy Barker, present.

Finally, they were married in a third, lavish wedding ceremony at a castle in Portofino, Italy.

Kardashian and Barker have children with other partners

Kourtney’s children, Mason, 13, Penelope, 10, and Reign, 8, whom she shares with ex-boyfriend Scott Disick, were in attendance, along with her new stepkids.

Barker’s son Landon, 19, and daughter Alabama, 17, with ex Shanna Moakler were also on hand to celebrate, along with stepdaughter Atiana De La Hoya, 23.

Travis Barker will be heading out on a world tour with Blink-182 beginning in March, kicking things off on March 11 in Tijuana, Mexico.