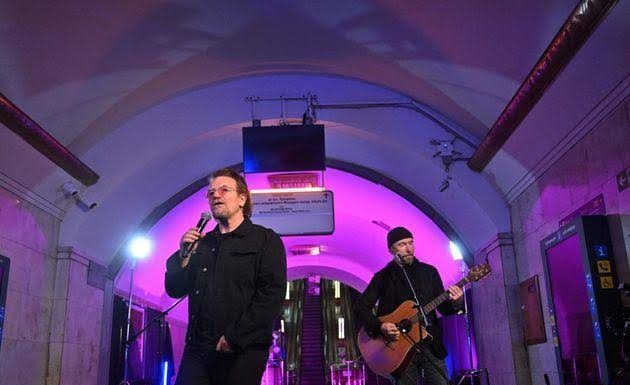 U2’s Bono and The Edge cheered up audiences in Ukraine on May 8 with a surprise performance at a subway station in Kyiv. The famous singer and guitarist was accompanied by members of a Ukrainian band as they performed a number of hit songs.

The 40-minute concert was held in support of Ukrainian forces fighting the Russian army.

They had been invited to perform by President Volodymyr Zelenskyy as a show of solidarity with the Ukrainian people.

“Your president leads the world in the cause of freedom right now… The people of Ukraine are not just fighting for your own freedom, you’re fighting for all of us who love freedom,” Bono told a crowd of about 100 people gathered inside the Khreshchatyk metro station.

Some of the hit songs performed with The Edge included With or Without You Desire, Angel of Harlem and Vertigo.

“I am grateful to Bono for supporting our people and drawing even more attention to the need to help our people,” Zelenskyy said in a video address.

The crowd cheered Bono on as between songs he said, “This evening, 8th of May, shots will ring out in the Ukraine sky, but you’ll be free at last. They can take your lives but they can never take your pride,” he said. The words were a quote from U2’s famous song Pride (In the Name of Love).

During his visit to Ukraine, Bono also visited Bucha, a nearby town where hundreds of bodies had been found last month after alleged Russian attacks as Moscow continues to deny allegations that Russian forces were responsible for killing civilians in Bucha.

This is not the first time that U2 has held a surprise concert though the one in Ukraine has special significance as the war with Russia rages on. Russia launched an unprovoked attack on Ukraine in February resulting in million of people having to flee their country and lose their homes with thousands killed in the war.

Ukraine’s capital Kyiv has rallied as Russian attempts to capture it have failed thanks to the Ukrainian military’s sharp defense.