Tensions have soared in recent weeks over Taiwan, the self-governing democracy claimed by China — and allied with the United States. How far the tensions will accelerate — and what the US response will be — is hotly debated among experts.

What is each side’s position?

China’s nationalist Kuomintang fled to the island in 1949 after losing the mainland’s civil war. The island of 24 million people has since transformed into a vibrant democracy and major tech hub, leading many — including President Tsai Ing-wen — to assert Taiwan’s separate identity.

The United States switched recognition from Taipei to Beijing in 1979, concluding that the Kuomintang was never going to retake the mainland, which has developed into one of the world’s top powers and key rival of Washington.

The US Congress in 1979 required the United States to provide Taiwan weapons for its self-defense but Washington has remained deliberately ambiguous on whether it would defend Taiwan in an invasion.

Why are tensions rising?

President Xi Jinping has asserted Chinese nationalism and following protests in Hong Kong has clamped down sharply on freedoms in the financial hub, which had been promised a separate system before its handover from Britain.

“Beijing’s dramatic demolition of that model in Hong Kong has had a significant impact on attitudes of many in Taiwan, even among those who might previously have been in favor of closer cultural or economic cross-strait ties,” said Carl Minzner, a senior fellow at the Council on Foreign Relations.

China has dramatically ramped up military activities in recent years, with a record number of planes intruding near the island in early October.

What is China’s goal?

Concerns have grown in the United States that Beijing is readying a full-scale invasion of Taiwan, although many experts reject the fears as overstated.

“In the last year, there has been a recognition that the Chinese military has either already achieved or is very close to achieving the capability of invading and controlling Taiwan,” said Bonnie Glaser, Asia director at the German Marshall Fund of the United States.

“For a long time, this was considered to be a real factor,” she said.

She pointed to worrisome signs including exercises that simulate bombing runs against Taiwanese ports or landings.

Glaser, however, is among those who doubt that China has a timetable to invade. Taiwan is the only issue that could bring the United States and China to war — which could escalate to the nuclear level.

“Having a military confrontation with the United States is something that China has tried to avoid for years,” Glaser said.

Xi would “be putting at risk all of the other goals that he has for his country,” she said.

“China’s goal, in my view, is one of instilling psychological despair among the people of Taiwan so that they essentially give up and say, well, we will just have to concede to Beijing and become part of China. So they really want to win without bloodshed.”

What will US do?

A growing number of pundits, notably Richard Haass, president of the Council on Foreign Relations, have called on the United States to move away from its “strategic ambiguity” on Taiwan and instead to warn China explicitly that the United States will intervene if there is an invasion.

Critics say that such a vow would backfire, with Chinese leaders already convinced that the United States is encouraging Taiwan’s pro-independence forces, despite repeated US assurances that it only recognizes Beijing.

President Joe Biden on October 21 triggered Chinese warnings when he said that the United States would defend Taiwan, although the White House quickly clarified that he was not changing policy.

For now, the Biden administration appears to be seeking steps to support Taiwan without triggering a crisis, such as encouraging its inclusion in international institutions.

Tsai voiced confidence in a CNN interview this week. Asked if the United States would defend Taiwan, she said, “I do have faith.” 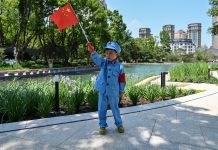