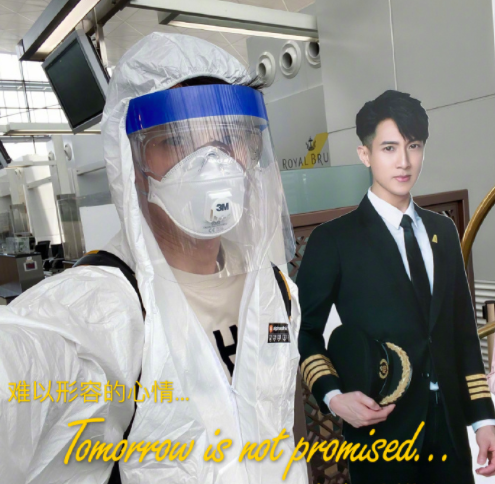 Former Fahrenheit member Wu Chun went all out to stay safe on his flight to China. He also video-called his daughter during his COVID-19 swab test. The Brunei-born star headed off to China for his first work trip in months. Wu Chun has been spending most of the year in his hometown in Brunei due to the lack of business trips amid the pandemic. He finally left for China on October 15 for work.

Wu Chun plans to join a charity run early next month but he flew over weeks in advance to undergo self-isolation. Although it was a good opportunity for him to ‘earn real money’ (as one Hong Kong media outlet snarkily put it), the 41-year-old and his family were reluctant to part ways after spending so much time together.

Based on his Weibo post, Wu Chun’s two children, Neinei, 10 and Max, 7, were worried about their father’s health.

“They kept asking what would happen if I caught the virus,” he wrote. “Would it mean they wouldn’t be able to see me for even longer?” To reassure them, he said, “Daddy still has important responsibilities. I will definitely do my best to protect myself. Never put off until tomorrow what you can do today!”

Wu Chun was not joking about protecting himself. He shared photos of himself in ‘airport fashion’ and it looked pretty intense. The singer-actor wore a mask, goggles, face shield and also a hazmat suit. Wu Chun really went the extra mile to stay safe. All of the other passengers on the same flight were dressed the same. The scene looked like something out of a post-apocalyptic sci-fi film.

When the plane arrived in China, Wu Chun had to get a COVID-19 swab test and Neinei insisted on seeing for herself even though she was in the middle of her ballet class and was freaked out at the thought of it. Wu Chun went on a video call with her during the process and then uploaded the clip on his Weibo account for all to see. The video was a bit shaky as it was not easy to take a selfie when there is a super long Q-tip stuck up your nose. Wu Chun looked uncomfortable as the tester inserted the swab up his nostril, wiggling it around and pulling out again. /TISG