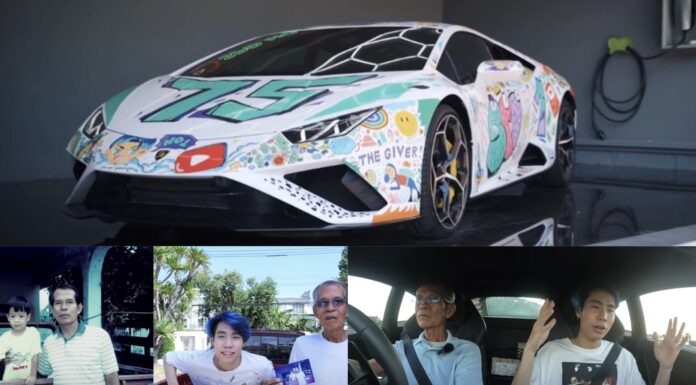 Bangkok — A popular Thai YouTuber who goes by the handle “SpriteDer SPD” recently bought his grandfather a custom Lamborghini and surprised his grandparents with cash as a token of gratitude.

Social media influencers such as YouTubers are known to make grand gestures, often involving supercars and loads of cash, making sure to capture the footage for more views.

In his video, Sprite said that his grandfather raised him since he was a child and used the same Nissan pickup truck.

The YouTuber then decided it was time for an upgrade. However, he tells his grandpa that he was just taking the pickup truck for a tune-up.

Donning a wig, a tattered shirt and armed with a case full of cash, Sprite went to a nearby Lamborghini dealer instead.

The stock condition of the supercar might have been too dull for Sprite, so he customized the vehicle with a colourful decal and added other finishing touches to the interior.

It was then time for the reveal, with the vehicle hidden behind a makeshift gift box.

Sprite also presents his grandparents with ฿4 million in cash.

He also takes the vehicle for a spin, with his grandfather behind the wheel.

The YouTuber, who has over 8.32 million subscribers, posted the video on Jan 10, now with more than 6.3 million views. /TISG

Read related: Most expensive whiteboard in the world! — Kid writes ‘I Love PAPA’ and draws all over white Audi R8

Most expensive whiteboard in the world! — Kid writes ‘I Love PAPA’ and draws all over white Audi R8