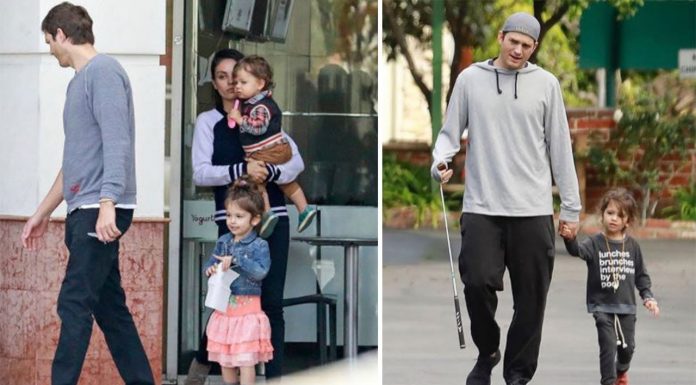 The Hollywood couple made a startling revelation recently that they never close the bathroom door in their home. Kunis told E News!, that she wanted to establish bodily functions as a standard norm.

“It’s just one of those things where, for better or for worse, as a family and the kids have all kinds of embodied bodily functions as a very standard norm. I’d never thought that I would be the person that was able to go to the bathroom with the door open.”

She said all this changed when her kids started knocking to come in whenever she was in the bathroom. Kunis and Kutcher have two children, 7-year-old Wyatt and 5-year-old Dimitri.

Apparently, bathing hasn’t been a popular activity in their household either. Some time ago, the couple shocked millions when they said that they don’t bathe their children often.

“When I had children, I also didn’t wash them every day. I wasn’t the parent that bathed my newborns ever,” said Kunis.

Meanwhile Kutcher had said that he “washed his armpits and crotch daily and nothing else ever,” and when it comes to the kids “if you see dirt on them, clean them. Otherwise, there’s no point.”

Kunis explained her aversion for showers for both herself and her children saying, “I don’t wash my body with soap every day. I didn’t have hot water growing up as a child, so I didn’t shower much anyway.” She did however say that important bits like her underarms, chest and private parts were always cleaned.

She courted more controversy on Dax Shepard’s podcast with his wife Kirsten Bell last year when she said, “My intent every day is to bathe my children. I wake up and say: Today I am going to shower my kids! And then bedtime happens and I forgot to feed them…” and the baths drop off the schedule.”

She also told Ellen DeGeneres on her show during the height of the pandemic, “I mean, I shower Ellen, The kids- there’s a a body of water they touch just about every day. Almost every other day. Sometimes it’s the pool, sometimes it’s the sprinkler. It just depends. It’s COVID. We didn’t leave the house. Who cares?”.

The couple received a lot of flak for their bathing habits, who knows what kind of controversy their open door bathroom policy is going to garner.