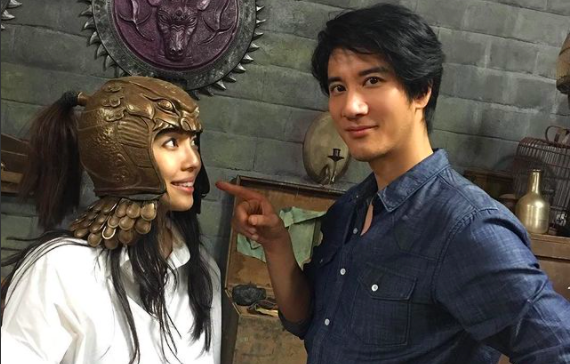 Singapore — In the wake of the hot mess triggered by Mandopop star Wang Leehom’s divorce from Lee Jinglei, it is the ex-wife who’s been earning praise from many netizens, particularly women.

Lee, 35, who is 10 years younger than Wang, is not in show business, but she is no pushover. Educated at Princeton, she earned a doctorate at Columbia University and once worked at JP Morgan as a financial analyst.

She gave it up to marry Wang, who told her he wanted a big family. She gave him three children in five years. And then what might have been a fairytale pairing went awry.

Lee recounted the myriad problems in their marriage in recent voluminous Instagram posts.

And her excellent Chinese writing skills have won her much praise with netizens, as the South China Morning Post reported on Dec 22.

SCMP reported: “Her words, nicknamed the “hammer of the thunder goddess”, have been praised as precise and powerful, especially when compared to her former partner.”

She has even been compared to the Norse god of thunder, Thor, since in Mandarin, the  “LEI” in her name sounds exactly the same as the word for “thunder”.

On Twitter, Lee has been praised for no longer tolerating her husband’s indiscretions.

“Go go go.. we love a woman who fight for her freedom and rights,” wrote one AVID Fan.

go go go.. we love a woman who fight for her freedom and rights

Shocked by the truth of #WangLeehom he is painted as a perfect man, with big talent and such a gentleman.

BIGGEST TWIST C-ENT EVER!!!
I won’t be able to trust celebs anymore

“Men can’t treat women terribly and just expect them to swallow it,” wrote Taiwanese journalist Natalie Tso. One commenter wrote, “My sympathy goes to #Lijinglei and her children. Truth always prevails in the end.”

Been stanning lots of men for a long time

and it’s not that long since I started stanning a woman. I’m glad my choice of men didn’t disappoint me till now.

My sympathy goes to #Lijinglei and her children. Truth always prevails in the end. https://t.co/JJOIdP4iqq

At the same time, many netizens have condemned Wang.

so proud to see these brave women coming out and exposing their rotten disgusting cheating men for the barbaric animals that they are.. #wangleehom may have seemed like a nice guy, but 知人知面不知心.

He kind of deserved it. Who let him to do those things? He had a lovely wife and kids. Still, he did those things. He should’ve lived happily with his family he already made. He shouldn’t have cheated on her. (According to what his wife said.)

For at least one woman, what Lee Jinglei endured was a lesson for women everywhere.

No matter what kind of person you marry, don’t lose your job and support yourself! This is the most basic aspect of a woman’s dignity not being trampled on #wanglihong #wangleehom #woman pic.twitter.com/StlwLw8CXN