Who would have thought that Madonna, at the age of 63, would be able to take over the internet and prove that she still rules the world in her own unique way?

Yes, it appears that the famous artist is defying time and ageing. She went berserk with a series of viral NFT videos in which she appears naked.

There are other fine details that drew the attention of Madonna’s fans and onlookers, those who probably thought she was from the distant past or gone. 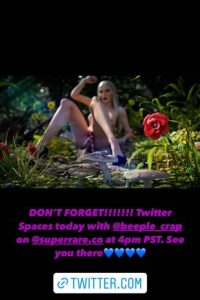 Not only did she also show a 3D scan of her vagina. Her NFT videos are of different art. They portray her as part and parcel of nature with creepy crawlers and plants emerging from her vagina!  See the pictures above – credit of Mother of Nature Photos Courtesy of SuperRare.

While the internet is still stunned by the incredible pictures and videos, Madonna defended her actions.

She is in collaboration with a digital artist to create three NFT videos for charity. And as if charities needed nudity to raise funds, the artist using a computer indeed, generated versions of the singer with her legs spread and yeah, with the creepy stuff emerging right from inside her.

Interviewed by the artist, Mike Winkelmann who goes by the name of Beeple, Madonna says: “I’m doing what women have been doing since the beginning of time, which is giving birth,”

“But on a more existential level, I’m giving birth to art and creativity and we would be lost without both,” she adds.

The collection also includes a 3D print of her genitals, with proceeds benefiting three charities: National Bail Out, V-Day, and Voices of Children.

Madonna showed she still has it in stunning photos in February, but her fans accuse her of ageing backwards and using filters, comparing her latest look to Kim Kardashian’s.

Fans say she’s “not the same person” after posing topless in a new photo posted on Instragram.